We use cookies (including third-party cookies) and other tracking technologies to customize the website to your needs or to offer you special features such as the integration of maps and video material by Google Maps and Youtube.

When using web analytics, Google Maps or Youtube, your data is processed in the USA. The USA is not accorded an adequate level of data protection by the European Court of Justice. In particular, there is a risk that your data may be subject to access by U.S. authorities for control and monitoring purposes and that no effective legal remedies are available against this.

You can specify which cookies may be used by selecting the respective slider in the cookie settings. In particular, you can decide whether or not to give your consent to the transfer of data to the USA (by selecting the "Analytics", "Google Maps" or "Youtube" sliders). Please note that based on your settings, not all functions of the site may be available anymore.

You can revoke your consent at any time. You can find a way to do this and more information about our data processing in our privacy policy.

Skip navigation
The ONE is gradually developing into a prominent part of the Frankfurt skyline. In September 2020, the steadily growing building has been attracting everyone’s attention on its north-eastern side with a spectacular 11-metre projecting steel construction at a height of 130 metres.

The element in question is a supporting structure for the 14-story building overhang, which gives the building its characteristic silhouette. Towards the Friedrich-Ebert-Anlage, the architecture of ONE forms an abstracted One and therefore indicates – even if this was not the original intention of the architects – what the building stands for. On the one hand, the building combines several forms of uses under one roof as a “vertical campus”.

On the other hand, the client CA Immo is pursuing the approach of creating a place for all the people of Frankfurt with various public offerings within the building: THE ONE FOR US.

“With the supporting scaffold, we projected up to eleven metres out into the free airspace. From here, the building grew another 50 metres with the overhang,” says Christoph Jakoby, Project Manager and Head of Project Development at CA Immo in Frankfurt.

“In these weeks in september, we implemented the biggest structural challenge that the architecture of the building has to offer.” The supporting structure was pre-assembled on the ground by the company PERI and lifted in seven individual truss segments, some of which were three storeys high, by crane to the respective positions of the structural shell façade at a height of 130 metres. Firmly anchored to the shell, the structure supported the load of the overhanging shell structure, which then had to be erected and which has a weight of several hundred tons of steel and concrete.

This aspect, which will give the building a feeling of great lightness, is a masterpiece of structural engineering.

The alignment of the substructure must be precisely defined in advance and implemented exactly by the contractors on the construction site to ensure a horizontal base surface is created later on. It goes without saying that the highest demands have been placed on the statics of the construction in relation to planning and implementation of the supporting structure as well as occupational health and safety for assembly and dismantling activities. 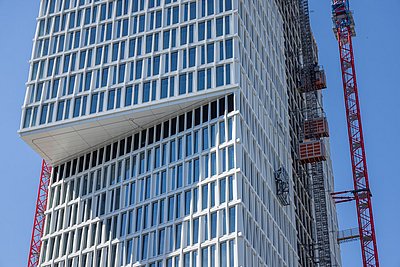 Once the reinforced concrete up to the 38th floor has hardened, the shell is able to support the load of the building. From this point on, the support structure will no longer be needed and was already removed.

More spectacular pictures of the construction site can be found here in our photo blog or on our Instagram channel @one.frankfurt